Very nice and well-written feature review of Criminal Pleasures today at Fiction Vixen. Actually made me miss Brendan and Marc! 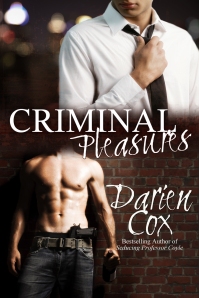 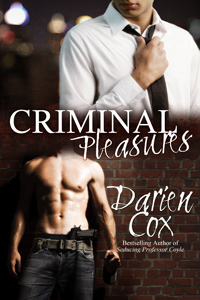 Closing in on the end of my new novel. Fortunately there is freaking ICE falling from the sky outside so I haven’t been able to do much else but write, so soon I’ll be sending to beta reader and editor and chomping my nails while I wait to hear back. I love the book, so I’m hoping that’s a good sign. Of course there’s always the possibility that I’m completely out of my mind. Will keep updates here when it moves to the final stage and is ready to go out into the world on its own two little feet.

My new release, Criminal Pleasures, has made the best seller list on All Romance, very cool!

My newest novel, CRIMINAL PLEASURES is now for sale on Amazon

When young attorney Brendan Burke opens his first law practice in a new city, he knows things are about to change in his life—though he never expected one of those things to be his sexual orientation. But when he meets Marcello, a sexy and mysterious stranger working at a restaurant in Providence’s Little Italy, he can’t fight his compulsion to pursue him. But while Marcello is willing to let Brendan into his bedroom, he’s stubbornly elusive about his past and his family. Fixated on discovering the truth, Brendan’s passion for Marcello turns out to be far more dangerous than he ever anticipated.