My new MM Romance novel ‘Guys on Top’ is officially released today. You can find it on Amazon as well as Smashwords, All Romance, and all the old familiar places.

Doug Crandall’s perfect suburban life imploded after his boyfriend’s betrayal and a subsequent lawsuit left him personally and financially devastated. A year later, with a new place in the city and a fresh outlook, he’s back on his feet and ready to start over. Eager to lose his cynicism and heal his battered heart, he immerses himself in the local social scene, which includes a pair of charismatic men engaged in an open relationship. As Doug finds himself becoming emotionally and sexually entangled in their lives, he’s forced to reevaluate his views on fidelity, betrayal, love, and the often calamitous price of happiness. 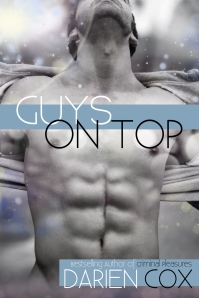 This one was a lot of fun to write, hope you all enjoy it!