Guys on the Side blurb

Guys on the Side has gone off to my editor, so will be out soon. Thought I’d share the blurb. 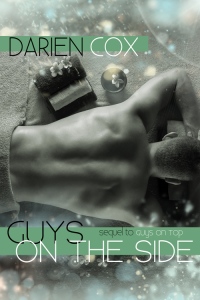 In the sequel to Guys on Top, we meet up with the Boston boys several months later. Corey has developed a close friendship with Doug, who’s still living in the apartment downstairs. But Doug plans to leave and move in with Stewart soon, and Corey finds himself feeling lost, since his own new relationship is beginning to implode—Zach’s insecurities over Corey’s promiscuous past turning from slightly annoying to downright irrational.

Corey’s stress increases when a conflict with a massage client’s homophobic family grows hostile, but through this debacle he meets Angelo, a local psychiatrist, who despite being straight, feels like a mirror image of himself. But soon this friendship becomes confusing as Angelo’s affection starts to feel not so platonic anymore. And for the first time in Corey’s life, he finds himself faced with a man who intimidates the hell out of him, and that he has absolutely no idea what to do with.