So happy to be hosting talented author Asha King today! Asha writes smokin hot interracial romance, sometimes with a paranormal kick, and her work is NOT for sissies. She will go there with the danger and darkness and isn’t averse to putting her extremely lovable heroes and heroines in great peril, but there’s always a satisfying payoff in the end. Her brand new release Stray Cat Strut is the latest installment in the Cats and Conjure collection, a series that has everything: Shifters, magic, sex, edge of your seat excitement, and some truly scary villains.

Welcome, Asha. So we’re all excited for another Cats and Conjure book and to catch up with Addie! She seems to be getting progressively stronger from book to book.

Yes! I mean, she always had a core of strength to her, but it’s far more prominent now. She grew up being told that her power was actually insanity so she became adept at burying it, but by the time Cat Scratch Fever rolled around, I think it was clear she was incredibly brave. And now that she’s coming into her powers, she’s grown far more confident and it shows. While I don’t think she was ever really a damsel in distress, her damsel-y qualities have certainly faded. It was important to me to have a heroine who was every bit as strong as the hero, if not in physical strength at least in her determination to do what’s right and protect those she loves.

The books in this series tend to end on cliffhangers. What was your reasoning for that, and do you get any criticism for it?

There’s this really weird divide between television and books in that people will watch something with cliffhanger episodes (or season endings) and gnash their teeth but get really excited about it.

Not so with books. I’m finding more and more writers get accusations of piecemealing stories and bilking readers out of their money, “forcing” them to buy the next books. And…well, first of all, yes, we’re trying to earn money. We want readers excited about our work and dying for the next book. That’s kind of how this works.

But while I’m sure some writers do that deliberately—cutting a book in half just to drag it out and get more sales—that was never my intent.

I find each installment a satisfying meal on its own, though they do leave me needing to know what’s next, so mission accomplished.

Yes, the Cats & Conjure books were designed to function like a TV show or series. Each novella has a complete arc—the first is Adelaide discovering what she is and how Erik will keep her hidden while Lincoln hunts him, the second is Addie being kidnapped and how Erik will free her—but is part of a larger story that’s serialized. Apparently it wasn’t the smartest choice on my part if several vocal readers are to be believed, but I think it makes for something fast-paced and exciting. And when the box sets release (the first is due to drop January 2016), it’ll make for Netflix-like binge-reading.

At the end of the day, I just remind myself that this is the way this story needed to be told. I can’t control what other people think, or whether or not they give the books a chance because of the serialized nature. There are a handful of readers who get the novellas and are on board with it, and that’s what’s important.

This is the third book in the series, and there’s been a gap of a year and a half between this one and the last one. Why the long wait? Are you worried readers will have forgotten about the series?

To answer the last question first, yes. It’s been a concern. There was a two month wait between the first, Cats in Heat, and the second, Cat Scratch Fever, and even that got me hate mail. So I’m aware of what a long gap there is this time around and although the series had some very loyal fans, the rate publishing moves now is so fast that it’s easy to get lost in the sea of books. I did add a recap PDF to my website, though, that readers can download to refresh their memories.

To the first question, there were a few factors behind the wait. Cat Scratch Fever came out December 2013 and I’d planned for Stray Cat Strut to be out February or March. By that time, though, sales numbers were back in and they were pretty abysmal. I don’t write full time, I have to fit it around the day job and my family, taking time away here and there when I could afford to. And I just couldn’t afford to with this book. On top of that, 2014 was a rough year for my family and I only ended up having one release (Cinders).

It’s great to have loyal readers, but there are certainly plenty of installments out now for NEW readers to sink their teeth into as well. Did you have trouble coming back to the world after so many months away from it?

Yes. I couldn’t remember what the side characters were named let alone looked like—I have multiple series in progress and I’d just spent the last several months working on romantic suspense fairy tales, so jumping back to paranormal was…difficult, at least initially.

I knew I was going to put out a print version of the first three novellas in one volume when the third was done, however, and it never hurts to give things another proofread. I dumped the first two books into Scrivener and took notes as I re-read them, and by the time I was through the second, I felt ready to jump into the third.

So your regular readers are dying to know at this point precisely what is up with Adelaide and the cats following her around.

Haha, I’ve been weaving in threads, but it hasn’t been answered. Yet. Mythology buffs will probably have an idea after Stray Cat Strut, but I intend to answer it in Alley Cat (the fourth book). Let’s just say there absolutely is a reason why she has an affinity for those of the feline persuasion and why they seem to be drawn to her, both housecats and then hot men who become her guardians. 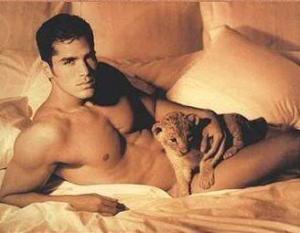 The book’s mythology does seem to come from several sources—is all of it based on existing myth or is some of it spawned from your own creative brain juice?

There’s a mix. In this book, there are vampire-like creatures hunting Adelaide and her crew that are based very, very loosely on some from Greek mythology, for example (also, as a hint for the next book: I will also say that there is a reason Lincoln is so powerful and why he summoned something from Greek myth).

And then there’s also Adelaide—separate from the whole why-cats-are-following-her-around thing is the fact that she practices Conjure, which is also known as rootwork and hoodoo. It’s a fascinating practice of Afro-Caribbean folk magic with Native American influences found throughout America (primarily the south). It’s not a religion—in fact, most practitioners have traditionally been Christian—so it can be practiced by people of any faith. Although I take plenty of liberties with it in these stories, it’s very real.

Oh hell, we’re not done with Lincoln yet?

He still has a role to play.

He is the worst.

He is. Deliberately so. There’s a risk with a young, attractive, powerful villain that readers will be cheering for him instead of the hero because we all like a sexy bad boy, right? (I do.)  So he had to be absolutely terrible with no redeemable qualities, nothing that might make him an antihero. His threats of sexual violence against Adelaide in Cat Scratch Fever, which were phrased not graphically but still not leaving any room for misinterpretation, were sickening and made it abundantly clear that no, this is not a secretly good man we’re dealing with. He is a monster through and through, and there’s nothing romantic about it.

What’s next for Adelaide and Erik? Especially given how this one ends?

They’ll be back in Alley Cat next year—their trials are far from over, clearly, and another villain is on the horizon, someone who we’ll see more of over the final three novellas.

This latest installment ends with a knockout punch to say the least. As a writer I think hate mail is preferable to indifference, but have you prepared for any potential reader rage-mail this one might generate?

Several boxes of wine and not checking my email should help.

Thanks so much for stopping by, Asha! Readers, click on over to to http://www.ashaking.com/ right now for a Rafflecopter Giveaway of any book from Asha King’s backlist.

Adelaide Deveraux has escaped her enemy’s compound along with her tiger-shifter lover, Erik Wells, but the home that had once been her sanctuary is now gone, burned to the ground and leaving them with no choice but to go on the run.

At least Erik knows a thing or two about running; he’s been doing it for most of his life, and he’s determined to keep Addie safe. Between their handful of allies and Addie’s growing magic, he thinks they just might have enough resources to survive, and, for the first time in his life, sees a future for himself and the woman he loves.

But the powerful sorcerer on their tail has more than owning Addie in his sights. Now he’s also out for revenge and not everyone will make it out alive…

Asha King likes good-looking men and hot books, and often strives to combine the two in contemporary, paranormal, and suspenseful romantic stories. She hails from the exotic land of Alberta, Canada, where she doesn’t ride a polar bear to work but does drink vast amounts of locally brewed beer and watches hockey.

She loves connecting with readers and you can keep up to date with her online at www.AshaKing.com, where you’ll find a list of her books as well as what she’s working on.